Today we woke up in Nogales Arizona bright and early to hit the border of Mexico.
As we awoke from our 5 star hotel of Super 8, I knew this was probably the last good bed and internet I would have for a while.
The day before we had gone to try and get our permits at the border, my initial plan was to just walk over, get them done and cross back to the USA and head out early the next day. But after crossing over we were told that further down the road at kilometer 21 there was a 24 immigration and Aduana (Customs) place where we had to do it.
It didn’t help that it was September 16 and everything right next to the border was closed, because it was Mexican Independence day, Viva Mexico! So everyone was pretty much tired and not cooperating with me as they were probably mad they were working that day and not out partying.
Regardless, it was now that morning and we headed off to Kilometer 21 for our stuff.
On the way we exchange currency at the change houses, the USA side change houses were buying the dollar at 11.8 and the change houses on the Mexico side were buying them at 12.15, and if you haggle you can get them up to 12.3. So we saved some money there. And Recommend anyone else traveling to Mexico to do the same.
We arrived at the Aduana and immigration at KM 21. Be sure to get there early because it can get crazy!
So as much as I love traveling, I hate border crossing with a vehicle. Its time consuming and in most countries of Central America, a complete pain in the @$$.
So here’s some nice information for those reading this blog who plan to travel to Mexico.
Steps of temporary vehicle importation papers into Mexico from the USA with USA vehicle: (ßyou’ll be surprised how many Google searches this will get)

1.        First you’ll get your stamp at immigration. You’ll go to Aduana (Customs)  where you’ll get yelled at to go to the Banjercito (a bank located there as well) to pay your immigration tourist visa stamp you just got for $20 U.S., to which you’ll proceed back to immigration for processing.

2.     Then you’ll go to Banjercito again to get your temporary vehicle importation permit, they’ll point you to make copies of your passport, vehicle title, immigration stamp/paper you just got and license, at $1 dollar a copy if you look American(unless you haggle them to 10 cents looking not so American-ish)


3.      You’ll then drag your already tired butt back to Banjercito, wait in line, and give them your documents along with either $400 US cash or a valid credit card so they can charge you that money. You will get that money back once you export your vehicle out of Mexico, (they don’t want you selling or leaving your vehicle in MX) until then the Bank logo says to you “thanks sucker!"


4.    You then yell at the bank teller for the exaggerated price and ridiculous bureaucracy involved in such a mundane and stupid thing (not really). You actually just fake a smile as you mumble profanities, and pay the $40 US for your permit and fork over the $400.


5.     Then you run as fast as you can out the building to burn some stress and the realization of the 2-3 hours you spend walking in countless circles.


6. You then pay the rude parking attendant that was supposedly “watching your bike” for you while you were gone, to which you secretly know and saw he was snooping around and seeing what he could grab off the bike for himself to take and keep, he doesn’t even say thank you, but you give him a back hand and loud “your welcome!” to his face as you throw some spare change in his hands and realize he probably needs it more than you. Which somehow convinces you that giving him the change was justifiable.

7.You then drive out only to get stopped and inspected by the officials waiting for you further down the road, just because you look like a tourist.

8. You then secretly mumble profanities at the customs officer as you fake a smile and yell thank you in Spanish
FYI- A single individual is only allowed to import one vehicle into Mexico at a time. So if you have a truck with a motorcycle behind it, you need to import both. As was the case with an America, couple we met, whose vehicles were registered only under the gentlemen’s name, and were turned back to the USA. You’ll need your marriage certificate or the vehicle titles under both names to do this. (And if you’re the couple I met that day, be sure to leave a comment or email so I can put your names in this entry and am curious to find out if you guys made it to Mexico)
There you have the grand adventure of crossing your American vehicle into Mexico at the Nogales border crossing.
Disclaimer- the above details were a comical recollection of my border crossing. I can assure you it’s not as bad as it sounds, it’s just time consuming, people are helpful, speaking Spanish really helps, the people are just doing their jobs, but there is definitely a lot of bureaucratic nonsense involved including the crazy $400 deposited you supposedly get back.
So onward we went!
The scenery was pleasant
Had some picture fun
More cool pictures
David and I’s first of many visits to the OXXO for a quick drink and interrogation by the wind washer guys walking around trying to clean our wind shields. 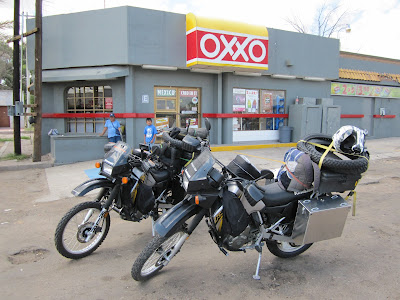 Had the best fish and Marlin tacos of my life! in Hermosillo 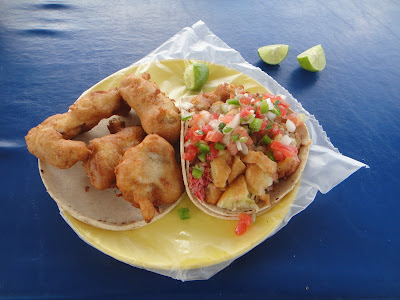 And many hours later made it to San Carlos 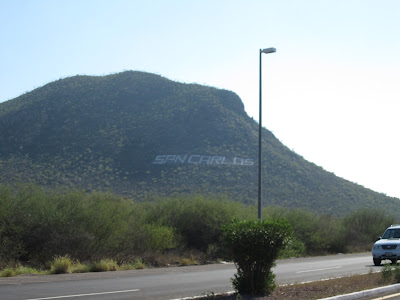 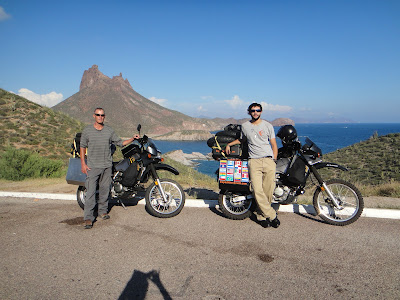 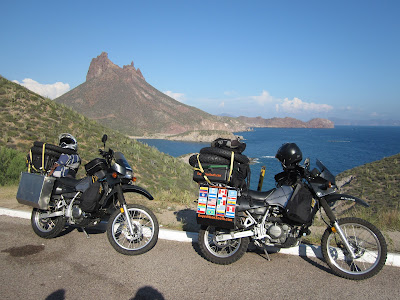 David also had his first taste of fame as other tourists and locals took pictures with us and the bike.
In the spirit of picture we took one of them as pay back. 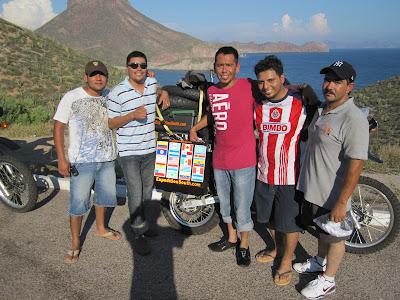